In the shady bloom of evening, when work is nearly done and the growling automobile which brought back the Primavesis has long since crawled back to its cave, I slip out to meet Mäda in the garden. I like to imagine that she lives there—that she guards and governs it, that it is for her that the frogs croak and the creek murmurs and the flowers stretch up towards the sun. From the edge of the orchard, I watch her run to meet me, her new white silk dress streaming out behind her, cloth flowers rustling at her waist and in her hair.

Mäda’s real name is Eugenia. That is the name her beady-eyed governess calls from the terrace when she sees us talking. When I first met her two years ago on my way to water the flowers, she told me never to call her by her mother’s name.

Breathless, Mäda reaches the gate and pulls it, creaking, open. Then she hugs me tightly. I smile as she talks, and when she finishes, I ask about Vienna.

She shrugs, nudging me along our favorite path, the one that leads down to the edge of the stream. “I missed it here. More space, less grown-up talking. But the streets were beautiful at night—too bad we weren’t allowed to go out by ourselves. You know, my father had an artist paint my portrait in Vienna. I have his name in my autograph book now.”

Last spring, I drew a picture of Mäda, but my mother wouldn’t let me give it to her for her birthday. Her parents get embarrassed when they see us playing. My parents just tell me to stay out of her way.

At the end of the path, we crouch down on hands and knees. We stick our faces in the lavender until we can’t smell anything. She fills her dress with flowers like a great white sail, then opens it and spins until they rain from her, all folded, their scents mixed with hers. Mäda says the painter dreams about her every night and that it takes a long time to live forever. Ravenously, we uproot the hyacinths, hands sunken deep in the soil. The stream licks the dirt from our fingers. With a splash, Mäda plunges a hyacinth down, then pulls it up, glistening. I splash her. She splashes back and threatens to baptize me. Barefoot, I run.

Where the stream empties into a tranquil pond, I throw a leg around the worn limb of a tree and hoist myself among its budding branches. Mäda stands bare-ankled in the lavender. She squints against the setting sun, and her white dress ripples. Mäda likes to read myths and tell lies. She says last night she dreamed she was trapped in the painting. Her lips sealed shut, she burned at the eyelids as the painter drew his feathered brush across her surface like a sorcerer.

“Do you think that’s where you’ll go when you die?” I ask. She is always talking about immortality. Once she told me that eating rose petals could help you live forever, and I haven’t yet proven her wrong.

She considers gravely, then shakes her head. “No. That’s where the painter will go.”

She calls a truce, and I climb down from the tree. Now we walk holding hands, giving the flowers ugly names and laughing.

I tear a rosebud from a thorn bush and hold it up for her. “This one’s called Mäda.”

Mäda snatches the rose, throws it down, and stomps on it. Pausing, she kneels down and looks at it, crushed. She scoops up a handful of soil.

“This is called Anna.”

She turns to me, squinting. I can’t tell if she is sorry. She unfurls her wet, pink tongue and licks the dirt from her palm. She swallows, wincing fiercely, and wipes her dirty hand on her new dress. Maybe I should have told her not to.

“Is this the latest way to live forever?” I ask. She doesn’t answer. “When they ask what’s on your dress, will you say Anna?”

We both laugh. We name the worm after her governess and the flies after her brothers. We spot a garter snake and call it Echidna. The sun drains from the garden like the mud in our hands as we gather it from the leaf-strewn bottom of the pond. Mäda’s pointed toes draw circles in the dust. I ask if I will ever see the painting.

“They’re bringing it to the house out here. My father says they’ll put it in a golden frame and hang it in the hall, and no one will be allowed to touch it. Even I will not be allowed.”

Mäda smirks, poking eyes in her circles. “It doesn’t look like me.”

The caresses of blue shadows give her hundreds of faces. She pulls the cloth flowers out of her hair and does a tap dance in the dust. I lift her discarded hyacinth, dripping, from Anna.

Inspired by the painting Mäda Primavesi (1912-1913) by Gustav Klimt, currently on view in the Metropolitan Museum of Art

Lauren Rooney is seventeen years old. She lives in New York City and attends school at Convent of the Sacred Heart, where she is a co-editor of the school literary magazine. Lauren’s work aims to engage with ideas of myth and symbol, often inspired by the parks and museums which have nurtured her imagination since childhood, and is  informed by her interests in philosophy and theology. The Met is one of her favorite places in the world. 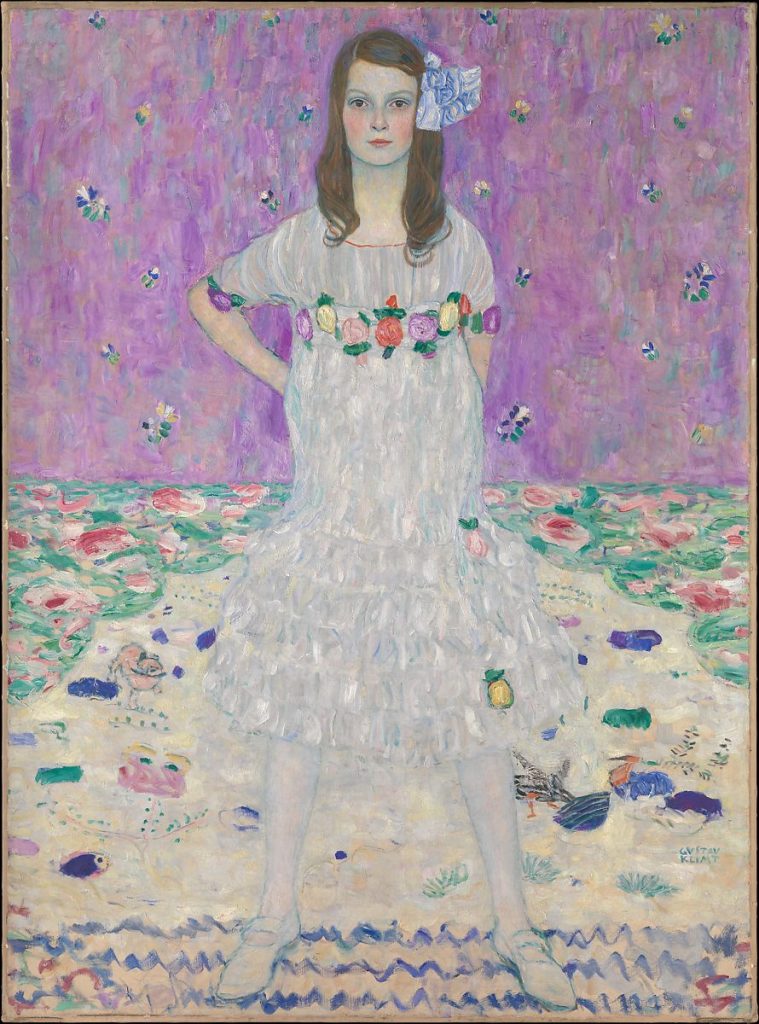